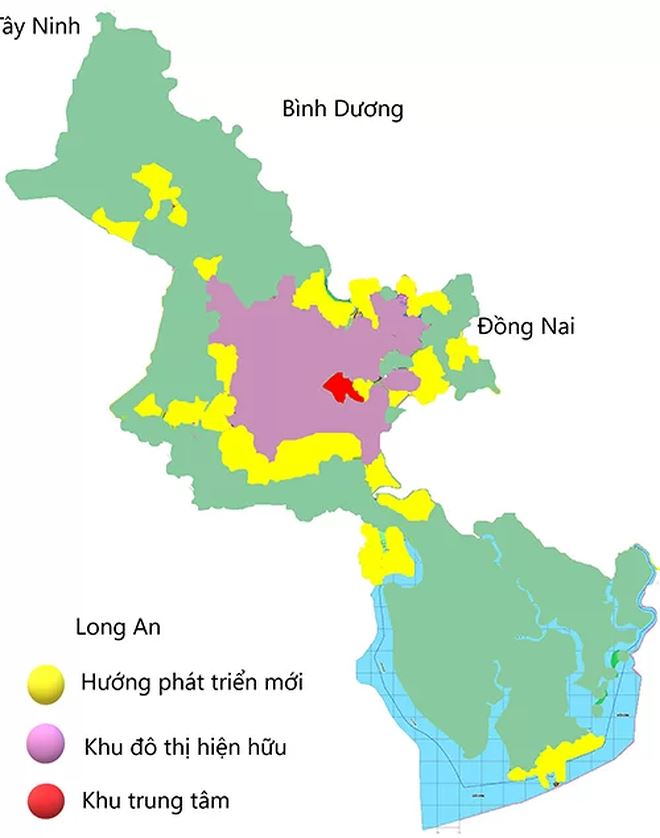 On July 24, the Department of Planning and Architecture of Ho Chi Minh City said that it is advising the City People’s Committee to select a consultancy unit to adjust the general plan to 2025, as the policy has been approved by the Prime Minister.
Accordingly, Ho Chi Minh City will follow the “multipolar” model – that is, there are many centers. The current urban area will renovate and develop underground spaces around the Metro station area into commercial centers and utilities attached to public transport. At the same time, the city will develop more in 4 directions.
The East (districts 2, 9 and Thu Duc) is developed along the Ho Chi Minh City – Long Thanh – Dau Giay expressway; new urban areas along the Hanoi Highway, the highlight is the high-tech zone, the Software Park Park National University of Ho Chi Minh City.
In the South (District 7, Nha Be), the city relies on hydrological conditions, topography of many rivers and canals, land for urban development to develop technical infrastructure, and serve drainage.
The Northwest (District 12, Hoc Mon and Cu Chi) has a land fund and favorable natural conditions to develop new urban areas with synchronous technical and social infrastructure. The Southwest (Binh Chanh, Tan Phu, Binh Tan) only develops suitable technical infrastructure.
In addition, the city also identifies the potential for eco-tourism development along the Saigon River, Can Gio beach and nature conservation areas.
This model is considered to be able to solve inadequacies in technical and social infrastructure (flooding, traffic jams, public spaces) and is suitable for the project to build Ho Chi Minh City into a smart city. period 2017-2020, vision to 2025.

According to Mr. Ly Khanh Tam Thao (Acting Chief of Urban Technical Infrastructure Department of Planning – Architecture), urban districts are generating many inadequacies in urban management; lack of parking lots and public spaces, housing policy also leads to imbalance in population distribution. On the other hand, climate change, sea level rise, inundation, uncontrolled urbanization … have put pressure on the city’s urban infrastructure.
From the adjustment period of the master plan in 2010 up to now, the city has many advantages suitable to the adjustment of the plan to 2025. For example, there are major changes in projects in the transportation network; radial axes, ring roads are gradually clear and put into service for people …
Regarding the general planning scheme, the city has three main reasons for proposing the Prime Minister: respond to legal basis, regional planning orientation to 2030 with a vision to 2050; according to the requirements of timely development orientations for climate change scenarios (not yet integrated in the adjustment in 2010).
Agreeing to this policy, the Prime Minister asked the Ho Chi Minh City People’s Committee to coordinate with other departments in implementing the Urban Planning Law.
According to Nguyen Tam (Vnexpress.net)
Like
Share

LAND IN THE HANGING PLANNING AREAS PURPOSE OF USE

LAND USE PLANNING TILL 2020

REGULATIONS ON LAND REDEMPTION AND EXEMPTION

Close
About us
Categories
Newest